Osterholz Bleibt Demonstration in Wuppertal – Vohwinkel: Forest instead of garbage!

As far as Oetelshofen is concerned, by the end of the year five hectares of forest in Osterholz on the city border of Wuppertal and Haan-Gruiten will be cleared „for cost reasons“. The Osterholzer forest is to give way to a so-called spoil heap. On this spoil heap, unusable material from the Osterholz quarry is to be stored. The managing directors of the Oetelshofen company, Mr. Jörg Iseke and Mr. Moritz Iseke (the latter is at the same time chairman of the CDU parliamentary group in the Wuppertal-Vohwinkel district council) do not like it so much when we call a spade a spade: The Osterholzer forest is to be used for the garbage disposal of „unusable material“ from the Osterholz quarry. 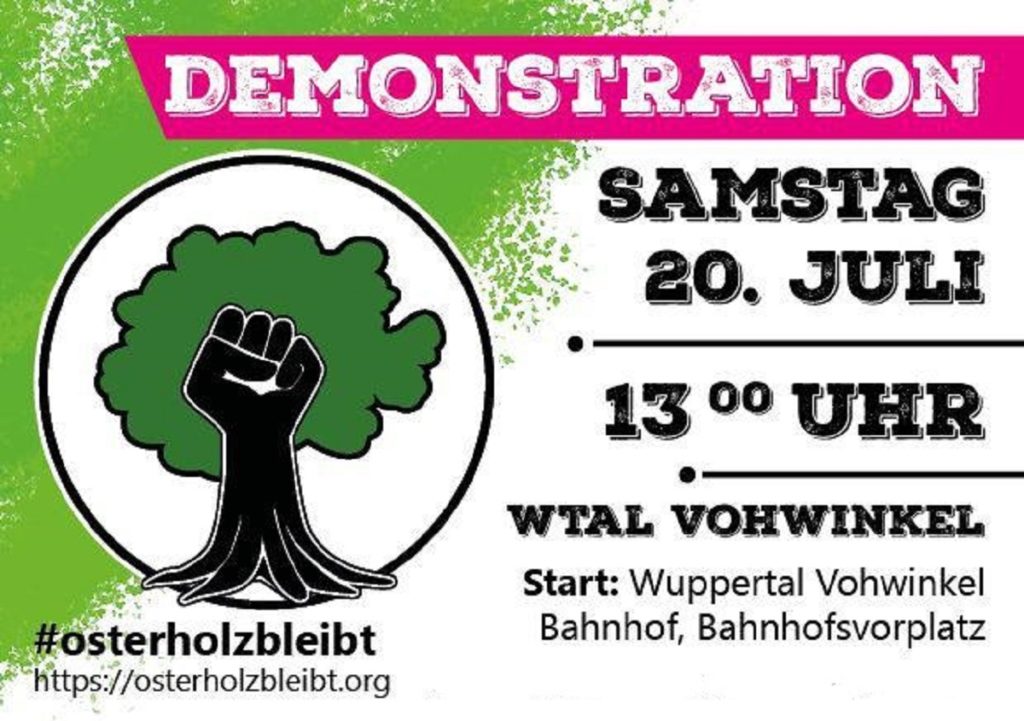 Osterholz is a species-rich forest area, where the habitat type „Waldmeister Buchenwald“, which is particularly worthy of protection, is extensively represented. Part of the subsoil is made up of water-permeable limestone or dolomite. There, ecologically valuable and rare landscape elements have developed, such as flow sources, dolines (collapse funnels of earlier near-surface caves) and a stream infiltration. There are also rare toads and bats in the area.

While more and more politicians finally demand the end of forest clearing and additional reforestation instead, the Osterholz forest is to be further cleared. In the planning process, the cities of Haan and Wuppertal were only able to make a recommendation. It is the Düsseldorf district government that ultimately decides. The district governments are first and foremost state authorities which carry out tasks for the state government within the framework of the state administrations in their districts. They are therefore part of the executive power of the state and are not directly elected by the population. So climate policy remains a handicraft and we have to stop deforestation ourselves.

Extracting chalk from the earth is anything but sustainable. At some point in the future, the raw material will no longer be available. A lot of energy in the form of fossil fuels has to be used for processing. Only a few years ago Oetelshofen received permission from the district government to operate two of its chalk ovens with lignite. In addition, CO2, which is bound in the rough chalk, escapes when chalk is burned. Burnt chalk is used, among other things, in desulphurisation plants for lignite-fired power stations and for the production of cement. Oetelshofen also supports the lignite industry in the Rhineland. RWE is one of Oetelshofen’s largest customers and Oetelshofen is thus jointly responsible for the greatest environmental destruction in the German state Northrhine-Westphalia (NRW). After lignite, the chalk industry is one of the dirtiest industries when it comes to CO2 emissions and respirable dust pollution.

The project of the Oetelshofen company is beautifully talked about with well-tried „greenwashing“ arguments such as „renaturation“. However, it is known that old forests can absorb considerably more CO2 than newly planted forests. Of course, this company does not talk about this. The company does not want to store their waste elsewhere, because it is too expensive.

Who needs money on a destroyed planet? Nobody! We will fight for the preservation of the Osterholz forest. There must be an end to the need for forests and other natural areas to give way because of the logic of profit.

You can support the mobilization by likening, sharing and inviting your friends to the Facebook event for the demonstration: https://www.facebook.com/events/1624510461012747/