Home English Osterholz stays! Call for a forest walk on June 30 and July 7, 2019 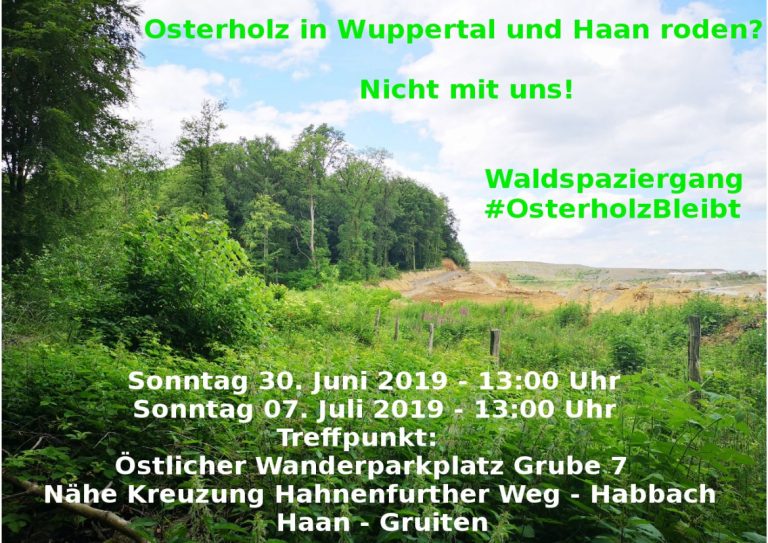 If things work out as planned for Oetelshofen, at the end of the year five hectares of forest will be harvested in Osterholz for cost reasons. The Osterholzer forest is to give way to a so-called spoil dump. On this spoil dump, unusable material from the Osterholz stone quarry is to be stored. The managing directors of the company Oetelshofen, Mr. Jörg Iseke and Mr. Moritz Iseke (the latter is at the same time parliamentary group chairman of the CDU in the district council Wuppetal-Vohwinkel) do not like to hear it so much, but if we call things by name, the Osterholzer Wald is to be used for the garbage disposal of „unusable material“ from the Osterholz quarry.

Osterholz is a species-rich forest area, where the biotope „Waldmeister Buchenwald“, which is particularly worthy to be protected, is extensively represented. Part of the subsoil is made up of water-permeable limestone and dolomite. Ecologically valuable, rare landscape elements have developed there, such as free flow springs, sinkholes (collapse funnels of earlier near-surface caves) and a creek infiltration. There are also rare toads and bats in the area.

Extracting lime out of the earth is anything but sustainable. At some point the raw material will no longer be available to future generations. A lot of energy in the form of fossil fuels has to be used for processing. In addition, the burning of lime releases CO2, which is bound in the limestones Burnt lime is used, for example, in desulphurization facilities for coal-fired power plants and in the production of cement.

The project of the Oetelshofen company is nicely talked about with tried and tested „greenwashing“ arguments such as renaturation, but it is known that old forests can absorb considerably more CO2 than newly planted forests. Of course, the company does not talk about this. The company does not want to store their waste elsewhere, because it is too expensive.

But who needs money on a destroyed planet? Nobody! We will fight for the preservation of the Osterholzer forest. It has to come to an end that forests and other natural areas have to give way due to the logic of profit.

Come for a walk in the Osterholz forest and get to know this beautiful forest. Together we can prevent the deforestation!

On June 27, 2019, there will be an information event about Osterholz in the Enough Info-Café, Wiesenstraße 48, Wuppertal (Germany).